Church of Our Lady of the Assumption

Church of Our Lady of Immaculate Conception 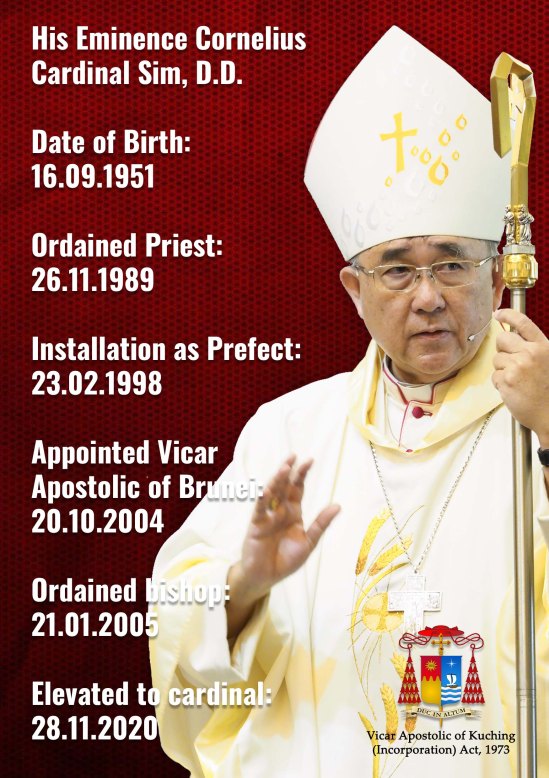 A PROFILE OF CORNELIUS SIM

The Bishop’s Coat of Arms With his elevation to the College of Cardinals, Bishop Cornelius Sim has updated his bishop’s coat of arms slightly. The biggest change is an emphasis on the colour red (or scarlet) of a cardinal. The red color of the hat and the number and color of the tassels signify the rank of Cardinal.

Prior to Second Vatican Council, the Pope would present a red-tasseled galero to new cardinals. This custom was discontinued in 1969 and the investiture now takes place with the scarlet biretta. In ecclesiastical heraldry, however, the scarlet galero is still displayed on the cardinal’s coat of arms. Cardinals had the right to display the galero in their cathedral, and when a cardinal died, it would be suspended from the ceiling above his tomb. Some cardinals will still have a galero made, even though it is not officially part of their apparel.

Hanging from the cardinal’s hat are 30 red tassels, in five rows, 15 on each side. There is also a gold (yellow) processional cross above the shield. The cross on a bishop’s coat of arms has one bar; an archbishop’s cross has two bars.  The left side of the shield bears the arms of his jurisdiction while the right side bears the things personal to him.

In the lower left section of the shield there is a golden embattled fess to represent the desert of Numidia with the dunes and an over standing sun with the monogram of Christ (IHS), rising in the red sky of the desert dawn. In heraldry, the sun symbolizes the Providence and the monogram means the Christocentric concept of the Providence.

But one may ask, what has the desert of Numidia got to do with Cardinal Sim’ coat of arms? The answer lies in the fact that Cardinal Sim is the Titular Bishop of Putia in Numidia. In ancient times, Putia in Numidia was in the region of Northern Africa (in present day Algeria and parts of Western Tunisia). St Augustine, the Bishop of Hippo, was primate. From his see in Hippo, which is now the modern city of Annaba in Algeria, St Augustine used to give advice to the bishops of Numidia.

In the lower right side of the shield several symbols are presented; the silver and blue wavy bars, a boat and a silver star.

The silver and blue wavy bars represent the sea. Cardinal Sim was born in Seria, a town fronting the sea, the South China Sea.

St Augustine and his mother St. Monica, which is also the name of Bishop’s Cornelius’s mother, left their country by boat to reach Italy where St Augustine journey to full conversion to Christianity. St Monica died in Ostia, close to Rome where she is buried. In a stained glass window of a Roman church, St Monica is painted with a boat close to her. The boat in the coat of arms symbolizes Christ’s apostolic vicar formally reaching the shores of Brunei Darussalam.

A silver star is one of the many ways to represent the Virgin Mary (Stella Matutina, Stella Maris, etc.) and reminds the Church of the Immaculate Conception where Cardinal Sim was ordained as priest.

Below the shield is the motto in Latin: “Duc In Altum” in English “Put Out into the Deep”, the first part of the verse from St Luke’s Gospel 5:4. The complete verse being: “When He had finished speaking, He said to Simon, “Put out into the deep water and let down your nets for a catch.” The motto serves as the essence of what Cardinal Sim wishes to achieve for the Church in Brunei Darussalam.

The sea, the boat, the star and the motto also appear in the crest of the Apostolic Vicariate in Brunei Darussalam.

Crest of the Apostolic Vicariate

The design of the Crest presents what the Catholic Church is in Brunei Darussalam. Taking its inspiration from the coat of arms of Bishop Cornelius, the crest shows the sea, the boat, the star and the motto.

Like in the Bishop’s coat of arms, the sea with its waves represents the challenging realities of human life. The boat, which represents the Church, has a cross and a sail. The cross signifies the centrality of Jesus Christ as the foundation of the Catholic Christian faith. The sail, which is in the shape of a dove, signifies the Holy Spirit that keeps the Church going in its faith journey. The star, which represents Mary, the mother of our Lord, recognizes the importance of Mary as a sign of hope and guiding star for Christians as they traverse the testing seawaves of life.

However, unlike the Bishop’s coat of arms, the Crest has two modifications. First, the motto “Duc In Altum” is not written in the crest but is implied by adding a net from the boat; a boat casting its net “into the deep” or the Church. Second, in the coat of arms, the boat, which is the Church, is sailing inward; representing the arrival of the teaching authority of the Bishop in deepening the faith of Christians in Brunei Darussalam. In the crest, the boat is sailing outward, reminding the Catholic faithful of the Church’s apostolic role of bringing Jesus Christ into the local community and beyond in unfamiliar situations or locations.

Seat of the Vicariate

In Brunei Darussalam, the Mother Church is at the Church of Our Lady of the Assumption in Bandar Seri Begawan. This Church serves as the central church of the Vicariate and houses the cathedra or the bishop’s chair or throne which symbolizes his teaching authority and his role as a teacher in the Catholic Church. It also provides support to the office of the bishop or the chancery and is his official residence.

Bishop Cornelius is supported by 3 local priests, the parish pastoral councils in the three (3) parishes as well as special bodies or commissions established to carry out various pastoral and missionary programs or activities of the Catholic Church in Brunei Darussalam.

Mission and Vision of the Vicariate

The mission and vision statements present the Vicariate’s identity, the source of that identity, its purpose, objectives, aspirations and the general approach of reaching those objectives and aspirations.

The Catholic Church has only one mission and one vision. Its mission is to “continue the works of Jesus Christ” and to make His name known and loved.

The following verses from the Holy Bible may provide the essence of the Church’s mission:

The Church’s vision is for all peoples to be united with God in His kingdom. The following verses from Matthew provide Jesus’ assuring words for that vision.

We, the Catholic faithful of the Apostolic Vicariate in Brunei Darussalam, embracing our different cultural backgrounds, uphold our Catholic identity founded on a faith community gathered in worship around the Word and the Sacraments.

Empowered by the Holy Spirit, we are commissioned to continue the mission of Jesus as active ministers of the Church and stewards of God’s gifts, and by living out the Gospel’s values as we reach out to the members of the society we live in. Under the guidance of our Apostolic Vicar and in the spirit of love and unity, we will become a visible sign of Christ’s presence in this country and beyond.

The Catholic Church in Brunei Darussalam is a welcoming community which is sustained by committed local leaders and a laity empowered in the Holy Spirit to be living witnesses to Christ’s Presence.

We are a church that continues her work of service through her ministering to all God’s people. Especially the youth and the unchurched by promoting and nurturing holiness, discipleship and stewardship. 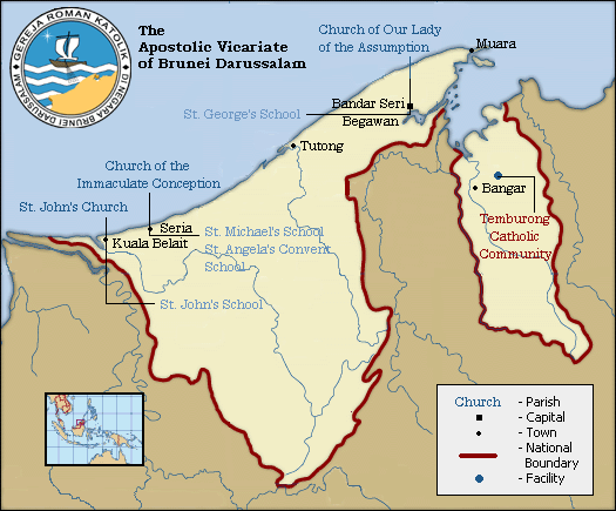 Milestones of the Church in Brunei

1858 Barambangan mission — Fr Riva of the Milan Foreign Missionaries (now known as PIME) was put in charge – he built a church and dedicated it to Our Lady of Every Grace.

1919 First recorded baptism in Brunei by Fr. A. Williams of Francis Newn.

1927 Brunei became part of the Apostolic Prefecture of Sarawak, Labuan and Brunei.

1932 First Resident priest in Brunei was Fr. A. Stotter

1936 Kuala Belait was made a head station with Fr Crowther, MHM as the first Resident priest in Kuala Belait.

1939 The Rectory in Kuala Belait built by Fr Crowther, MHM

1941 Mr George Newn Ah Foott donated a piece of land in Jalan Kumbang Pasang on which a school, a chapel and the priest living quarters were built.

1952 Brunei became part of the Apostolic Vicaritate of Kuching.

1956 The Convent in Seria was set up by the sisters of St Joseph.

1976 Brunei became part of the Diocese of Miri-Brunei

1991 Sr Celestine Ho, principal of St Angela’s Girls School at Seria and Sr Eamonn Chan, a teacher at the same school, return to Malaysia on Feb 18 and Feb 24 respectively

1992 Fr Ivan Fang, MHM. was appointed as parish priest to Church of Our Lady of the Assumption.

1997 Establishment of the Apostolic Prefecture of Brunei Darussalam.

2004 John Paul II on October 20 established the Apostolic Vicariate of Brunei and appointed Msgr Cornelius Sim as its first bishop.

Over the years, the Catholic Church in Brunei has been part of several ecclesiastical circumscriptions: